On the Record PDF

It is January 1971, and in the ornate Legislative Chamber of the Nebraska State Capital, a lone black barber is being sworn in as the state senator of Legislative District 11 representing the people of North Omaha. Senator Chambers was a well-known African American activist before his election. After his election, he became the most well-known Nebraska elected official. The self-described “Defender of the Downtrodden” was repeatedly reelected by the residents of Legislative District 11, making him, to date, the longest-serving state senator in the nation’s only nonpartisan one-house Legislature known as the Nebraska Unicameral. His eloquent oratory, empowered by his words and ideas, is grounded in biblical stories, constitutional law, legislative rules, and racism in America.

ON THE RECORD is compiled from all of Senator Chambers’ floor speeches delivered during the 105th Legislature, Second Session, a 60-day session. It is arranged in three volumes covering 20 days each and is taken from the official transcript of the Nebraska Legislature, assembled and printed by the legislative transcribers of the Clerk of the Legislature. The readers will see the rough draft transcript of the proceedings and throughout specific reference to the legislative day. The numbers accompanying the day refer to the page in the legislative transcript from which Senator Chambers’ speeches are taken. 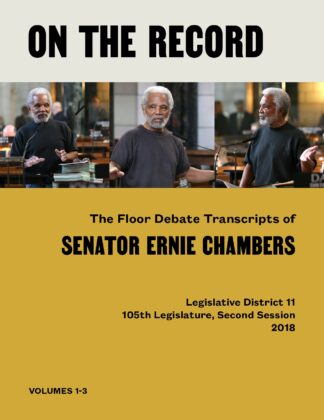